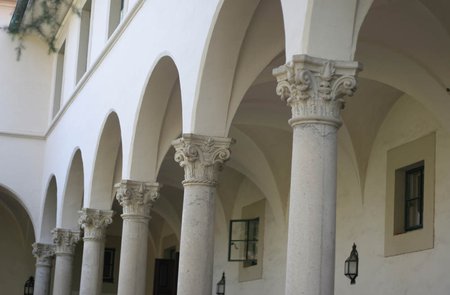 On October 19, Caltech, along with the Presidents' Alliance on Higher Education and Immigration, five other research institutions and public universities, and a broad coalition of business, manufacturing, trade, and labor organizations, filed suit in federal court to block the U.S. Department of Homeland Security (DHS) and the U.S. Department of Labor (DOL) from implementing and enforcing interim final rules that the lawsuit alleged were "designed to substantially restrict, if not outright eliminate the H-1B visa category."

The H-1B program allows high-skilled workers to come temporarily to the United States to perform services in specialty occupations. In the Caltech community, including JPL, more than 160 scientists, engineers, and scholars are active visa holders who currently contribute to the Institute's research and educational enterprise.

In a ruling issued December 1, Judge Jeffrey S. White of the United States District Court for Northern California ruled in favor of Caltech and the other plaintiffs and issued a partial summary judgment against the federal government that sets aside the two rules.

The complaint alleged that the government failed to comply with the notice-and-comment period required by the Administrative Procedure Act (APA), and that there was an insufficient basis to justify the immediate publication of the rules; the DHS rules would have become effective on December 7 and the DOL rules were effective immediately.

Consequently, the complaint alleged, neither employers nor employees had an opportunity to provide data and insight on the impact of the rules on hundreds of thousands of individuals and on scores of hospitals, universities, businesses, and others that employ these workers.

"This is an important victory, not only for higher education, but for the American economy," said Miriam Feldblum, executive director of the Presidents' Alliance on Higher Education and Immigration, in a statement.

"In his ruling, Judge White affirmed what we knew to be true: the administration violated the APA's notice and comment requirements, procedurally short-circuiting the congressionally mandated public comment period, all the more serious because doing so would have cut off an important pipeline of talent, innovation, and knowledge. Our nation's knowledge economy depends on diverse talent from around the world, including skilled researchers, scholars, students, and workers. Higher education institutions and businesses are competing with institutions from around the world for the best minds, and we need to ensure that our immigration rules enhance, rather than deter, our ability to compete," Feldblum said.

The interim rules, the lawsuit alleged, would have severed "the employment relationship of hundreds of thousands of existing employees in the United States," and would have effectively prevented the hiring of new individuals via the H-1B program, while also gutting EB-2 and EB-3 immigrant visas, which provide for permanent residence in the United States.

"Seminal achievements in science and technology, as well as the ability of institutions like Caltech to respond to today's most critical challenges, depend on the contributions of ambitious and original scholars from around the world," noted Caltech president Thomas F. Rosenbaum, when the lawsuit was filed. "To this end, the H-1B visa program has helped the United States become the destination of choice for these immensely talented individuals, providing security in their employment status."